The MotoAmerica Twins Cup class has had a major influx of entrants this season, and there is a large disparity in the age of the competitors: from 16 all the way to 50. In Saturday’s race one, those riders at the upper end of the age range showed their prowess, and the oldest of the group won the race. Fifty-year-old Michael Barnes, whose motorcycle road racing career has spanned three decades, won the race aboard his Quarterley Racing Ducati. He bested Curtis Murray, who finished second on his RBoM Racing Suzuki, and 42-year-old defending class champion Chris Parrish who was aboard his #1 Ghetto Customs Suzuki.

Barnes, whose plan to race in Twins Cup came together late, said, “Chris Boy from MotoCorse Performance contacted me. It was kind of just a thrown-together deal. ‘Are you interested in doing it?’  I’m like, ‘Oh, yeah. Let’s do it.’ So, we got a couple sessions out at a track day a week-and-a-half ago at Homestead. Got a little bit of seat time on it. Then we just came up here and got a wet session yesterday, so this morning was the first dry session. We had a lot to learn this morning. Didn’t change too much, but the bike’s just really solid.

“These guys built an incredible race bike. They have a Ducati shop down in Fort Lauderdale and they just put out a lot of good, good stuff. So, I’m just stoked that I was able to get these guys to build the bike. Bob Robbins has been the supporter behind Quarterley Racing. He’s my big supporter for this effort. I got to thank him tremendously for this opportunity. It looks like we’ll probably be doing VIR and don’t really have support after that. So, we’ll see what happens.”

This tour is a self-guided motorcycle tour that has stops throughout the state of Texas. The tour is open to all types of motorcycles (as defined by Texas Law) and riders/passengers. All riders must be at least 18 years old and licensed to operate a motorcycle. Riders are to be safety conscience and obey traffic laws. Participants in the tour will visit tour stops that include roadside attractions, historical sites, memorials, unique geography, and biker friendly businesses. For…
Find out more »

The HIDEOUT: Bikes, Blues and BBQ at The Pig Trail

Our goal at THE HIDEOUT has always been to host a safe and affordable event along the Pig Trail (Highway 23) in Ozark, AR. 2020 marks our third year hosting this event.
Find out more »

The Rendezvous  is an old-school, no frills motorcycle camp out and meet up. Enjoy the open road, making new old friends and great eats at our cast iron cookout. Registration is not required.
Find out more »

Off-Road | Side Roads | Back Roads … It’s all about the ride. The Rendezvous is an old-school, no-frills motorcycle campout and meet up. Enjoy the open road, making new old friends, and great eats at our cast iron cookout. Registration is not required because this ain’t a rally Live music is unplugged and if you know how to pick or strum, join in. We have brought back Dr. Bob and his crew of guitar pickin’…
Find out more »

Join us for Bike Night at The Ranch Harley-Davidson in College Station on Thursday, September 24th from 6pm-8pm. As always, all bikes are welcome!
Find out more » 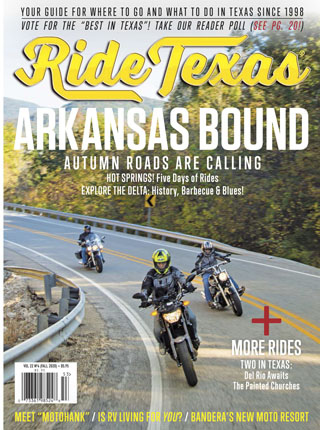